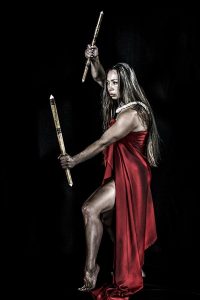 Michelle began studying hula at the age of 3 and martial arts at 9. She is a first generation Senior Black Belt under Olohe Solomon Kaihewalu, and the only woman instructor. She was also given the designation of Knight Commander by the Royal Order of Kamehameha I; the first woman in history to be knighted for her work in promoting, perpetuating, and preserving the Hawaiian combat art, Lua.

Michelle is known and respected for her fighting skills and work as a TV host, MMA fight commentator, fight actress, and film/TV narrator. She selectively books various teaching, speaking, modeling, film, television, theatre, print and radio projects. Michelle has graced the pages of various print and digital newspapers and magazine such as Inside Kung Fu, Sports Illustrated, Martial Arts Masters Magazine, Seni Beladiri (Malaysia), Tae Kwon Do Times (Korea), All About Martial Arts, KenpoGirl, Herstory, Martial Arts Illustrated UK, and Europe’s Warrior Magazine. She is a Masters Hall of Fame inductee (2006), World Black Belt named her Martial Artist of the Month (2002), Argentina Martial Arts Hall of Fame inductee (2016), Munich Hall of Honours inductee (2017), Gathering of Eagles Kenpo International Hall of Fame (2017). Michelle has worked as a live ringside fight color commentator, host of the Masters Hall of Fame World News, host/producer of Silk Warrior TV and InfluentialTV, Heroes’ Hearts, and as a contributing author to several literary and documentary works. Recently she has landed the lead actress and fight coordinator in the Indie film, IN3DRAGON and TV show, Michael Caine. These are historic projects as it it the first time the Lua is shown in this way.

She has taught for a private Southern California college and has sat on several college boards as an academic advisory board member. She has earned a Juris Doctorate, Diploma in Leadership for Senior Executives from Harvard Business School, and an Associate Certificate in Project Management from George Washington University. She is a hopeful candidate for a Certificate in Genetics, Biochemistry, and Physiology from Harvard Medical School.