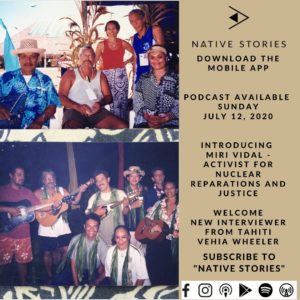 New to Native Stories is Interviewer @_vehia_
Miri Vidal lives in Papetoai, Mo’orea. She is a Tifaifai-quilt maker (traditional Tahitian quilt maker), an activist for nuclear reparations and justice, a mother and a grandmother. Miri was living on O’ahu, Hawai’i during the 1990’s at the height of the Nuclear Free and Independent Pacific (also known as NFIP) era. During this time, France had been conducting nuclear tests on Tahiti, French Polynesia for decades. France started nuclear testing in French Polynesia in 1966 until 1996, conducting between 175-188 nuclear tests on Moruroa and Fangataufa atolls. France was taking part in the world “nuclear arms race” where nuclear tests were being developed by large industrial countries as a means of warfare. Other examples would be the US nuclear tests on Bikini Island in Micronesia during the 1950’s. Miri was a representative of Tahiti and the NFIP activists of Tahiti in Hawai’i. She gave speeches with Mililani Trask during NFIP marches and protests, and frequented Kekuni Blaisdell’s house for discussions on Pacific sovereignty. And during the 90’s, she brought over a group of Kanaka Maoli activists to Tahiti to bridge the islands and build solidarity during the anti-colonial military movement. Miri Vidal was born in the south of France from Tahitian parents in 1953 during the French Algerian War, a war of Algerian resistance to French nuclear testing on their land. Being in the military, her father was then transferred to Madagascar, and they travelled by a French cruise ship through the Suez Canal to the island of Madagascar, who were at the beginning of their Independence from France in 1962-65. Her travel through the Suez Canal, stopping in the Middle East on different port stops gave her an opportunity to experience and see many different cultures from around the area. She moved to Tahiti in 1966, and lived with her Aunty and Uncle. Her Uncle was a renown photographer for a French magazine among other things. Her experience living in Tahiti brought her into contact with many politicians from Tahiti and France and many others from local bourgeoise class and navy, there to implant the nuclear testing in Moruroa, Hao & Fangataufa.
You can contact Miri on her FB pages
https://www.facebook.com/miritifaifai
https://www.facebook.com/tifaifaimiri
Pictured on Top: (L-R): Man with hat is from Rapa Nui (name unknown), Imai Kanahele, Miri Vidal, Soli Niheu, Aunty Terry Kekoʻolani
Native Stories previously interviewed Imai and Terrilee.