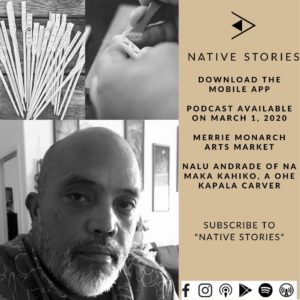 Nalu first had an interest in carving at the age of six when he was witness to the 1978 voyage of Hokulea.  He borrowed carving and voyaging books from his school library and began to try to make his own canoe with items found around his home.  While still in high school, he was asked to help with the lashing on Hokulea at Pier 40.  During his time with Hokulea he met many artists and carvers that were involved in the new Hawaiian renaissance.  Keone Nunes became his good friend, mentor, and first formal teacher; guiding Nalu in his carving and hula.  Wright Bowman Jr. along with Gil Ane asked Nalu to help with the construction of Hawaii Loa; were he continued his education in carving and lashing.

After high school, Nalu began making bone ko’i and makau for craft fairs and for the Bishop Museum gift shop.  In 2015, Nalu created Na Maka Kahiko.  Blending the old with the new; he created his hand carved ohe kapala earrings inspired by designs found at the Bishop Museum.  With his business, Nalu sells not only his earrings, but also hair picks, ohe kapala stamps, bone makau and ko’i pendants, ohe hano ihu, ohe pu, and hu oeoe.  Na Maka Kahiko items can be purchased at the Bishop Museum Gift Shop, Native Intelligence on Maui, Hawaiian Force in Hilo, Merrie Monarch Invitational Craft Fair,  Made in Hawaii Craft Fair, and various other shops and craft fairs.  Nalu also has an online store where he sells his items all over the world.

Nalu resides in Honouliuli, Ewa with his wife Lisa and their two children.