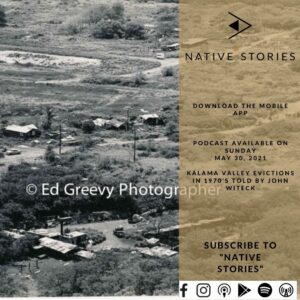 Before there were homes here today, it was farmland, and before that Hawaii Kai or originally named maunalua was known to be one of the largest fishponds and food producing areas on Oahu, sustaining the people. Today we will be discussing the Kalama Valley Protests in the 1970’s. High cost of living was hard on residents, like my grandparents , people had to leave Hawaii to afford a roof over their heads. In 1968, Kalama Valley was Re zoned from agricultural to urban land. The owners, Bishop Estate, gave permission to Kaiser to develop the land. Kaiser was an industrialist that developed along the south east coast of Oahu. Residents were told to leave before July 1970. In July 1970, Some refused to leave, and 3 were arrested. Today we have Mr John Wittek who was one of those 3. Those remaining were evicted and 32 people were arrested on May 11,1971 while standing their ground while bulldozers were standing ready.